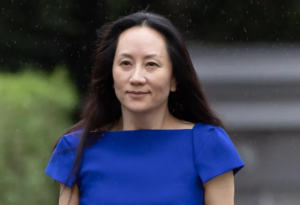 The U.S. government has dismissed fraud allegations against Meng Wanzhou, the Chief Financial Officer (CFO) of Chinese telecoms equipment manufacturer Huawei. Meng was indicted in 2019 for bank fraud and other charges for allegedly conducting business in Iran in violation of U.S. sanctions. In 2020, she was further indicted for trade secrets theft.

Meng was arrested in December 2018 by the Canadian police at the request of the U.S. government. Extradition hearings lingered for two and a half years, and Meng avoided being transferred to U.S. custody by entering a deferred prosecution agreement in September 2021 where she admitted to misleading financial institutions regarding Huawei’s business in Iran. She then left Canada for China after spending over 1,000 days under house arrest as part of her bail conditions.

Meng’s case was high profile and viewed as part of a broader scuffle between the U.S. and Chinese governments. It strained relations between both countries. China notably detained two Canadian nationals shortly after Meng’s arrest and freed them on the day Meng boarded a plane to return to China.

Despite the dismissal, the U.S. government remains at loggerheads with Huawei. Just last week, the U.S. Federal Communications Commission (FCC) approved new rules banning the sale of Huawei equipment within its borders, citing national security concerns. Allied nations like Australia, Canada, Sweden, and New Zealand have also banned the sale of Huawei equipment within their borders.

Palmer Luckey’s Defense Startup Anduril Raises $1.5B, Valued At $7B